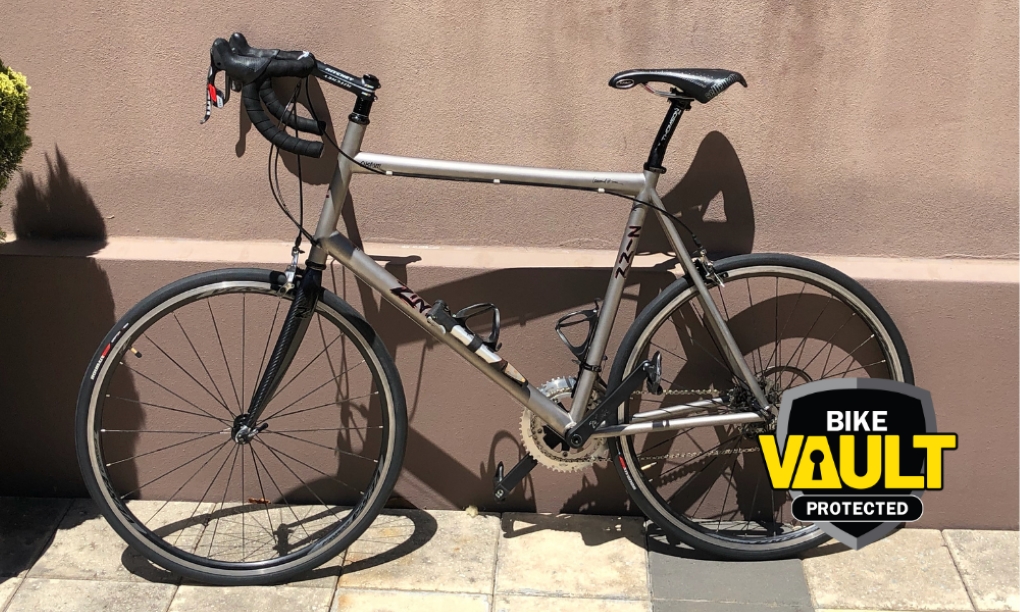 Stolen bike recovered after 5 years thanks to a BikeVAULT stolen bike spotter!

Recovering a stolen bike is a waiting game!

Regardless of the ultimate motives of the thief, there is a good chance that the bike will end up for sale at some point, providing an opportunity for the bike to be identified and recovered.  In Gordon’s case, his bike stolen from his house in Western Australia in December 2015 and took over 5 years for the opportunity to occur!

Gordon was both shocked and elated when he received a message from BikeVAULT informing him that his much-cherished custom Zinn bike had been spotted in an online sale advertisement five years after it had been stolen.  Gordon's bike was one of the first bikes added to the BikeVAULT website when it was launched in 2016.  Whilst no longer displayed as a latest stolen bike listing, it was easily found by a seasoned stolen bike spotter named David, who regularly searches and compares bikes advertised for sale with the 15,000 stolen bikes on BikeVAULT.  David's efforts have resulted in other bikes being recovered in Western Australia.

Following normal BikeVAULT practice of confirming identification and locking down the evidence, Gordon then contacted the police hoping for a quick response and recovery.  Unfortunately, Gordon’s enthusiasm was quickly diminished when it was revealed that enlisting police assistance to recover his bike from the seller may not have been as straightforward as it first appeared.

The length of time between a theft event and in some cases where the property was stolen and is later found can lead to a number of legal and evidentiary problems for the police.  As a general principle of law, a thief cannot pass legitimate title to stolen property, but in many cases where there is a significant time gap the property may have changed hands a number of times and the current seller may well claim that they obtained the property legitimately.

The police response in these types of cases is more often than not dictated by priority against other demands and caution regarding the potential evidentiary limitations. They are likely to want time to examine all of the available information before intervening.

When an advertisement for a stolen bike is identified via BikeVAULT this cautious approach by the police can of course lead to losing track of the bike again if the seller is able to on-sell it before the police intervene.

Gordon’s bike had been advertised for $6,000 so he decided to make his own inquiries directly with the seller. The unsatisfactory responses by the seller convinced Gordon that this was not a legitimate sale.  While BikeVAULT does not recommend approaching a seller without police involvement, Gordon did attend the address and was able to secure the return of his bike.

The matter now remains in the hands of the police.

“I am very lucky to get my bike back. I am also very thankful to BikeVAULT and their Stolen Bike Spotter and also Zinn cycles and their customer in the US, who also saw my bike while searching for his stolen bike. I would also like to thank Brad from BikeVAULT for persevering in contacting me after such a long time as my number had changed and it would have been easy not to bother.”

In appreciation of David our seasoned stolen bike spotter going out of his way to assist, he will receive a BIKE ID KIT+ Family Pack valued at $99.00, to increase his bike fleet identification beyond a single frame serial number that on many modern bikes is susceptible to manipulation.