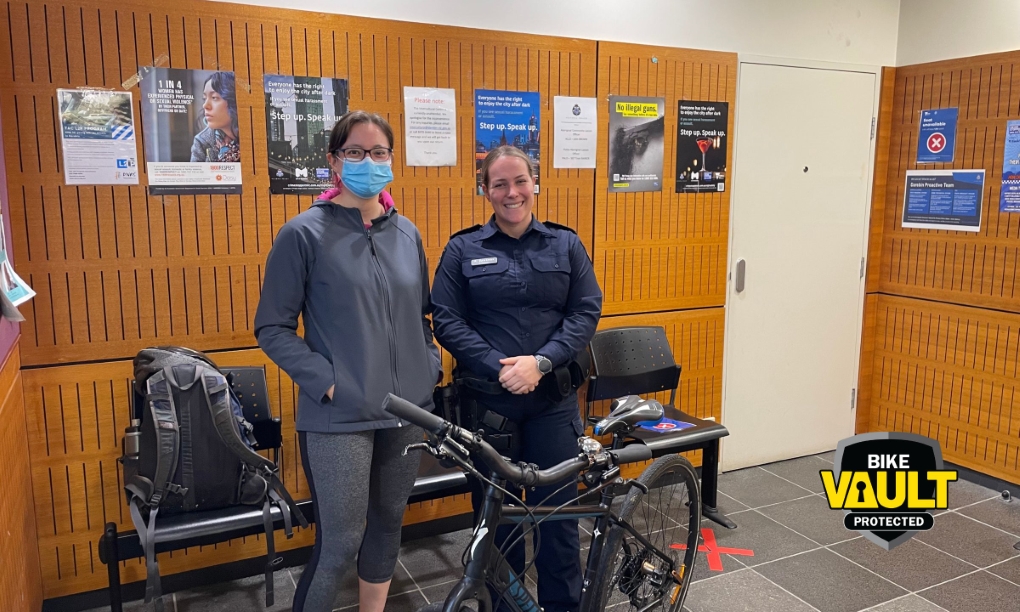 Clarissa is happy to be reunited with her Specialized Sport Vita Disc Bike after it was stolen from her house in Melbourne and sold on Gumtree to an unsuspecting buyer.

After noticing her bike was stolen in mid-June, Clarissa reported it to the police who advised her to list it on BikeVAULT as stolen.

Listed on the BikeVAULT portal, Clarissa’s bike was made publicly searchable. This allows second-hand bike buyers to conduct a quick stolen bike search and informs the broader community to be on the lookout.

RELATED: Why you should register your bike for free with BikeVAULT

Two members of the community both submitted information via the ‘make a report’ button attached to Clarissa’s report to inform us that a bike of similar description had been spotted for sale on Gumtree.

Unfortunately, before Clarissa had a chance to list her bike as stolen, the bike was sold just three days after the theft to an unsuspecting buyer on Gumtree.

The buyer did their due diligence and checked BikeVAULT to ensure it wasn’t stolen. When confirmed it wasn’t listed, the buyer went ahead with the purchase.

A week after he was scanning BikeVAULT to help a friend locate their stolen bike when he stumbled across his recently purchased bike listed as stolen.

Needless to say, the buyer was shocked and immediately notified the team at BikeVAULT. The details were assessed by BikeVAULT’s team of former police experts in bike identification. After confirmation of the match, it was reported to the police who arranged for Clarissa to collect the bike from the police station.

Police now have a lead and are currently investigating the thief.

Unfortunately, online buyers are prime targets for cunning thieves to make a profit from stolen goods. Targeted bike theft is fuelled by the ease that thieves can profit from selling stolen bikes to unsuspecting purchasers, with little to no fear of the stolen bike being identified and them being caught and prosecuted by the police.

BikeVAULT, part of PropertyVAULT has made it harder for thieves to sell stolen items and helped create a safer trading place for used bike buyers who now have the means to check a bike's provenance to avoid buying stolen bikes.

By registering your bike on BikeVAULT, you are securing your ownership and the bike’s identification for life. In the unfortunate event your bike is stolen, a custom-designed public and police-accessible stolen report is made available on our search portal so your bike can be publicly searched and identified before a thief has a chance to sell it.

RELATED: Buyer Beware - BikeVAULT's Tips on How to Avoid Buying a Stolen Bike

Go to the PropertyVAULT News Page to read a sampling of over 1000 stolen bike recoveries that BikeVAULT has aided victims and police with over the past 6 years.

Thanks to a Good Samaritan, Beatrice's stolen bike was recovered whilst she cycled in Europe
Teamwork resulted in the recovery of Jim's stolen bike!
Scammers targeting theft victims on social media
Bike Recovered After Unsuspecting Buyer Purchases Stolen Bike from Gumtree
Anonymous Tip-Off and Ghost ID Leads to Stolen Bike Recovery from Cash Converters
Five stolen bikes recovered in two days - three suspect bike thieves apprehended – All thanks to our vigilant BikeVAULT stolen bike spotters!
Help reunite Sarah with her stolen two wheeled soulmate! Reward Offered!
Missing for nearly 2 years - Recovered within a few hours from Cash Converters thanks to a BikeVAULT stolen bike spotter!
Owners Wanted - Owners Found! Two stolen bikes reunited with their owners.
One bike recovered, one still missing - How Torbens wife's stolen bike was recovered!
Love your bike? Protect It - Join & Register your bike for FREE with BikeVAULT!
The tools used to reduce car theft by 75% can work to reduce all property crime!
Divine intervention and no fuss fast police work resulted in Kelvin's stolen bike being quickly recovered!
De-identified but still identifiable - Ben's stolen bike was recovered thanks to a Good Samaritan checking BikeVAULT!
Lightning strikes twice - Kade's account of how his bike was stolen and recovered twice!
A joint effort by Margit, BikeVAULT and the QLD Police resulted in her stolen bike being quickly recovered!
Why you should register your bike for Free with BikeVAULT
Stolen Bike Spotter tip-off uncovered a suspected organised stolen bike racket operating between the ACT and NSW!
Stolen bikes have no borders - $11,000 bike stolen in New South Wales recovered in Victoria
Five bikes recovered thanks to vigilant BikeVAULT - 'Stolen Bike Spotters'!
All News