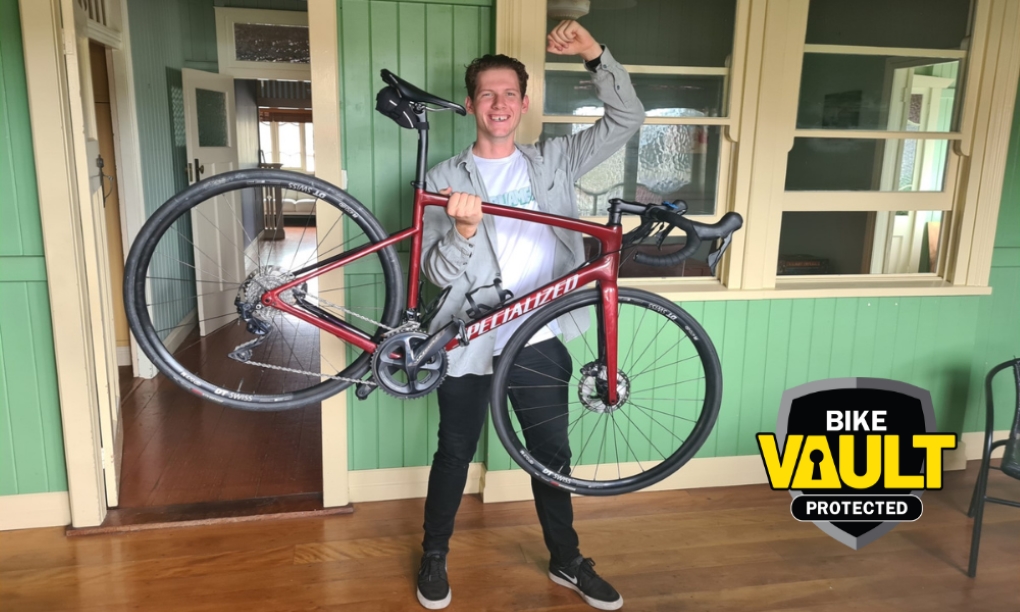 James’s near new Specialized Tarmac was stolen from his apartment garage bike cage in Woolloongabba, Qld on 18 October 2020.

Devastated to find his bike taken from what he believed was a secure bike cage, he reported his theft to his local police and then shared his bike on social media, where he was referred to BikeVAULT - part of the PropertyVAULT suite of asset registers to combat theft.

Buoyed by prior recovery stories and the message we tell all victims not to give up, James’s reported his bike stolen.  As with all stolen reports on PropertyVAULT, they are reviewed and approved by one of our experienced former police admins, who are experts in bike identification and assisting victims and police in finding and recovering stolen bikes.  Once approved, James received our email with our proven tips and tools to aid in recovering stolen bikes, which includes a national list of secondhand dealers and pawn shops.

Following our recovery blueprint – James emailed all the secondhand dealers in Queensland and visited the shops nearby.  Rewarded by his efforts, within a day of the theft a female tried to sell James’s bike to the Cash Converter store in Runaway bay.  Runaway was fitting – as the staff quickly identified the bike to be James’s bike reported stolen on BikeVAULT.  Realising there was no quick earn to be had the female left the store with the bike and the staff at Cash Converters Runaway Bay contacted James and the police.

Clearly desperate and somewhat not so smart, the female then went to the Cash Converters store in Ashmore, where she tried to offload the bike.  The jig was up this time, as the staff at Ashmore who have helped to recover stolen bikes prior, were ready and called the police as she entered the store with James’s bike.  Whilst waiting for the police to arrive, the female who had become suspicious decamped the store, leaving behind James’s bike.

We understand the police now have a solid lead on the female who is suspected to have either been in involved in the theft or a 'knowing handler' (black market trader), hoping to profit from selling the stolen bike.

Big thanks to Cash Converters for not buying the bike and helping to recover it and thanks to BikeVAULT for the free service and the tools and the list that led to my bike being recovered.